Fiction writers and those who write for the silver screen rack their brains trying to come up with exciting and realistic plots. Tegan Broadwater has in his head, real life adventures based on his own life story that go well beyond the movies or adventure books. This story is filled with the little known dangerous assignments that our valiant police officers perform in their efforts to protect our society. Often an officers survival is founded upon his savvy and quick wit. In addition to being a great read, it is a text book on how to survive in the dangerous world of drug trafficking.

“Life in the Fish Bowl” is a gripping story of a Fort Worth undercover narcotics police officer’s determination to rid his city of a violent organized gang which was terrorizing and murdering innocent people. Tegan Broadwater, a “clean looking” tall white guy, spent a year and a half risking his very existence while finding a way to infiltrate a local black Crip Gang notorious for dope trafficking throughout the country. He was determined and personally committed to making a difference – to having an impact on the operation of this vicious generational cycle of gang violence in Fort Worth.

This is a book that should be read by all. It was written with passion by the person on the scene, who found a way to live within the real world of crime that exists inside the towns and cities of America.

Tegan Broadwater is the insider’s insider, and he has written this story with deep knowledge that he won the hard way. His account of infiltrating a murderous drug gang is told with a winning combination of smarts, insight and edge-of-the-seat action. Anyone who wants to understand how this slice of the world really works can find the answers here, along with a cracking good tale.

For me there’s no more compelling reading than books written by cops who can write. An undercover cop who captures the real drama of what it is like to act for your life is the most “unputdownable” of all. This, in particular, is must reading for every cop in or out of uniform. Tegan Broadwater taught me a few things that are going into my lesson plan for “Undercover Survival Tactics.” 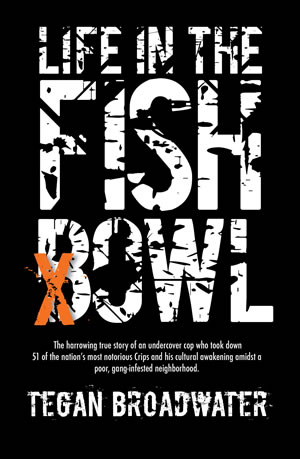